The 34 Most Memorable Ava Gardner Quotes 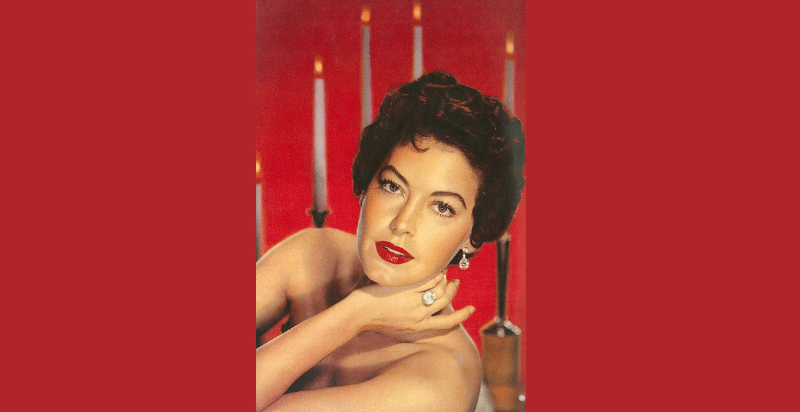 Ava Gardner was born on December 24, 1922 and died on January 25, 1990. She was part of a very big family. She’s the youngest of seven children. Gardner had a difficult childhood because her parents were poor while she was growing up. She managed to hold on to her faith. Her mother raised her and her siblings to be religious. Unfortunately, her father died while she was a teenager. It was hard on the family so she knew she had to do something to help out the family. After she graduated from high school, Gardner attended secretarial classes at a Christian college.

In the summer of 1940, she decided to visit one of her sisters in New York and that visit changed her life. Ava’s sister’s husband was a photographer and he decided to take her picture and he put it in the window of his studio. Then, someone from a studio noticed her picture. Barnard Duhan suggested that someone give her information to the executives at MGM Studios. Gardner auditioned for Al Altman who worked for MGM at the time. He thought she couldn’t act, sing, or talk properly, but she ended up being great. Altman offered her a chance to act so she quit school in 1941 to go to Hollywood. She had a southern accent so the executives wanted her to learn to speak without it.

Ava Gardner’s first feature film was a small role in the movie We Were Dancing. She had some small roles in other films too. Her first starring role was in the movie 3 Men In White. Gardner became a household name in the movie The Killers. Some of her other famous movies are Mogambo, The Night Of The Iguana, The Life And Times Of Judge Roy Bean, The Hucksters, Showboat, Lone Star, The Barefoot Contessa, etc. She was nominated for Oscars, BAFTAs, and Golden Globe Awards. She earned a San Sebastian Award for The Night Of The Iguana.

Here are some quotes from Ava Gardner.

1. “People who like working confuse me. They act as if it’s some obligation. I would much rather be doing what I’m doing because it’s easy and perfect.”

2. “Just because I was cast as sirens and vixens people tend to think I am like those characters in real life. They were dead wrong about that.”

3. “I can’t tell you how much agony I went through with all of my marriages. I did my best to make them all work for me, but they didn’t. I went into each marriage thinking they would last forever. Unfortunately, I couldn’t be more wrong. All of my marriages lasted no more than two years.”

4. “The only rule I have to acting is to trust the director with everything I have.”

5. “I know the reason why my marriages didn’t last long. I love hard, but not smart.”

6. “After I finished my audition, the director happily said, I couldn’t talk or act. He said I was great.”

7. “With the way people are in Hollywood, I can be considered normal. I don’t take drugs. I have never been arrested. I don’t need to see a shrink. I feel like I accomplished something.”

8. “I didn’t like being upstaged by another person on my birthday. People got my birthday confused with Jesus Christ’s birthday. I was upset by it. It took me a while to get over having to celebrate my birthday with Jesus.”

9. “ I don’t like cheaters. I won’t tolerate cheating. I have never cheated on anyone and don’t want anyone to cheat on me.”

10. “I haven’t taken good care of my body the way I should. I have stayed up late and haven’t gotten enough sleep. I did have a lot of fun. If I had wrinkles, I had a good time getting them.”

11. “I don’t consider myself an actress. Most of us weren’t actors and actresses at MGM. We all had good looks.”

12. “Fame will give you everything you never asked for in life. It could be a good thing or a bad thing.”

14. “I didn’t want to do what it took to be an excellent actress. I never respected acting. I even learned my scripts on the way to work.”

16. “I have so many flaws. You would think I would be able to understand the flaws in others. Unfortunately, I don’t understand them and I won’t forgive them.”

18. “Frank and I talked so much that our phone bills were through the roof. I found so many letters that Frank wrote to me. Frank sent me a telegram every day telling me how much he loved me and missed me. He needed someone to love him. Is there any wonder why I loved him?”

19. “I had to deal with verbally and physically abusive men. I defended myself against Hughes, Sinatra, and Shaw’s mental cruelty. The worst cruelty came from George C. Scott. He was a crazy person when he drank too much. When we were traveling, he broke in my room. He made me scared for my life. He kept asking me why I wouldn’t marry him. I told him I wouldn’t marry an alcoholic. I drink too, but I’m happy when I get drunk. I don’t threaten people when I’m drunk.”

20. “Whenever I do something, it’s for a reason. The reason is usually money.”

21. “When I get angry and lose my temper you won’t be able to find it anywhere.”

22. “Even though people find it hard to believe, I will always be a country girl. I have country girl beliefs.”

24. “ It’s a shame people can’t just lust after anyone anymore.”

25. “I’m okay with getting older. If I die early, I want to go smoking and drinking.”

26. “If I could do it all over again, I would do everything the same. I might make a couple of changes, but it would basically be the same. In reality, I had a great life.”

27. “Money and celebrity status mean nothing if you don’t have a happy life.”

28. “Love is nothing more than an irritation.”

29. “Sex isn’t everything unless you’re having it with someone you love.”

30. “Equality for women is essential. In the end, it doesn’t matter who is in charge as long as you have money.”

31. “When you have come to the realization that your marriage is over, it can be a terrible feeling. I tend to stay to myself. I stop drinking when I am going through something bad in my life. I go away and deal with it for a little while. I stay away until I can deal with the situation.”

32. “Don’t believe that negative remarks and criticism don’t hurt people. People try to make you feel better by saying you’ll get used to it. You try to get used to it, but it doesn’t work. You never get over it. The words are always hurtful.”

33. “I guess if you wait long enough someone will say good things about you.”

34. “In the end, I won my man back the way I knew I would. I would love to know how you’re going to change that. If you want to fight, I’ll fight you. Who wants to get hurt first?”

Words can only get so far at capturing the beauty of Ava Gardner. Here is an awesome tribute video that really captures her presence on screen.

Ava Gardner had an exciting life. She was able to live out her dream of becoming a movie star and also had an interesting personal life. Throughout her life, she was married three times. Her first marriage was to actor Mickey Rooney. Their marriage lasted for one year. She divorced him because of mental cruelty, gambling, and adultery. Her second marriage was to a musician named Artie Shaw. She was married to him for over a year. Her last marriage was to singer/actor Frank Sinatra. They were married for six years. She considered him to be the love of her life. The marriage was controversial because he left his other wife for her.  Ava was also involved with actor Benjamin Tatar.

Ava was asked to write a book about her famous life. She had an amazing career during her time in the spotlight and she was quoted throughout her life. During Ava’s time in Hollywood, women in the spotlight weren’t taken seriously in Hollywood. Ava was known for making some snide remarks about herself as well as other celebrities in Hollywood. Her quotes are an interesting perspective on a different era.